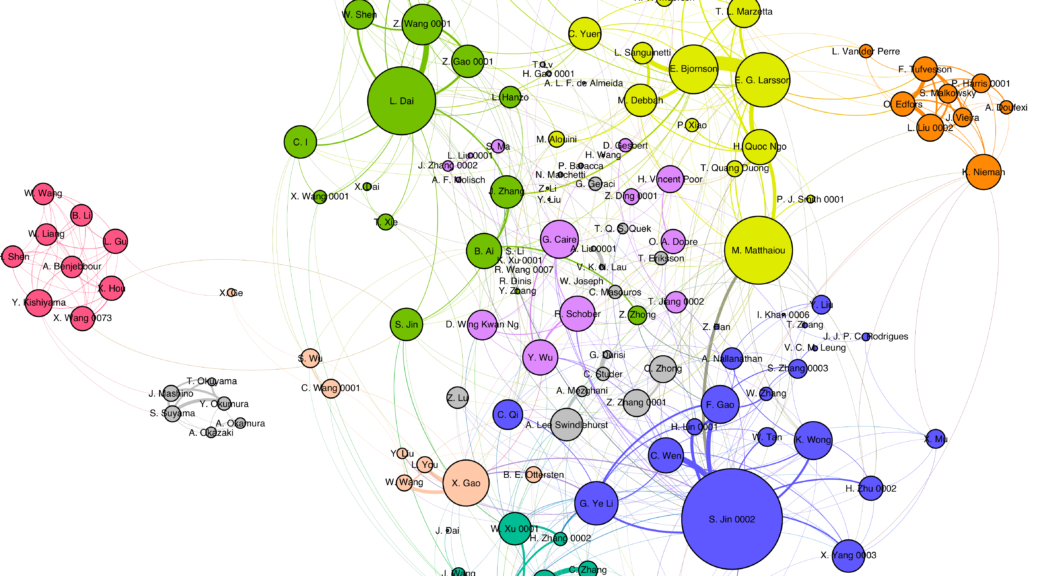 I taught a course on complex networks this fall, and one component of the course is a hands-on session where students use the SNAP C++ and Python libraries for graph analysis, and Gephi for visualization. One available dataset is DBLP, a large publication database in computer science, that actually includes a lot of electrical engineering as well.

In a small experiment I filtered DBLP for papers with both “massive” and “MIMO” in the title, and analyzed the resulting co-author graph. There are 17200 papers and some 6000 authors.  There is a large connected component, with over 400 additional much smaller connected components!

Then I looked more closely at authors who have written at least 20 papers. Each node is an author, its size is proportional to his/her number of “massive MIMO papers”, and its color represents identified communities. Edge thicknesses represent the number of co-authored papers.  Some long-standing collaborators, former students, and other friends stand out.  (Click on the figure to enlarge it.)

To remind readers of the obvious, prolificacy is not the same as impact, even though they are often correlated. Also, the study is not entirely rigorous. For one thing, it trusts that DBLP properly distinguishes authors with the same name (consider e.g., “Li Li”) and I do not know how well it really does that. Second, in a random inspection all papers I had filtered out dealt with “massive MIMO” as we know it. However, theoretically, the search criterion would also catch papers on, say, MIMO control theory for a massive power plant.  Also, the filtering does miss some papers written before the “massive MIMO” term was established, perhaps most importantly Thomas Marzetta’s seminal paper on “unlimited antennas”.  Third, the analysis is limited to publications covered by DBLP, which also means, conversely, that there is no specific quality threshold for the publication venues. Anyone interested in learning more, drop me a note.

When T. Marzetta introduced the Massive MIMO concept in his seminal article from 2010, he concluded that “the phenomenon of pilot contamination impose[s] fundamental limitations on what can be achieved with a noncooperative cellular multiuser MIMO system.”

More precisely, he showed that the channel capacity under i.i.d. Rayleigh fading converges to a finite limit as the number of base stations goes to infinity.  The value of this limit is determined by the interference level in the channel estimation phase. There are hundreds of papers on IEEEXplore that deals with the pilot contamination issue, trying to push the limit upwards or achieve higher performance for a given number of antennas. Various advanced mitigation methods have been developed to cure the symptoms of pilot contamination.

But was pilot contamination really a fundamental limitation to start with? In 2018, we published a paper called “Massive MIMO Has Unlimited Capacity” where we showed that there is an unexpectedly simple solution to the problem. You don’t need a sledgehammer to “crack the pilot contamination nut“, but the right combination of state-of-the-art tools will do. While I have written about this in previous blog posts and briefly mentioned it in videos, I have finally recorded a comprehensive lecture on the topic. It is 82 minutes long and was given online by invitation from Hacettepe University, Turkey. No previous knowledge on the topic is required. I hope you will enjoy it in small or big doses!

Like many other teachers, I had to quickly switch from physical teaching to online mode at the beginning of the COVID-19 pandemic. I am normally giving lectures in a course called Multiple Antenna Communications in the period March to May. It is a luxury to teach this course since there are only 5-10 students and these have actively selected the course so they are truly interested in the topic!

Since I was anyway going to give online lectures, I was thinking: Why not record them in a way that other people could also benefit from them? I normally give 2-hour lectures where I switch between presenting PowerPoint slides and giving examples on the whiteboard; for example, I might make a theoretical derivation on the board and then summarize it on a slide and show simulation results. This time, I decided to decouple these activities by creating one video per lecture that the students could watch in advance, and then I had live sessions where I went through prepared examples and answered questions. This was done by sharing my screen and write the examples into OneNote using a simple drawing pad, which isn’t so much different from writing on a whiteboard.

I think this online teaching approach was quite successful. I am quite satisfied with the 12 lecture videos that I created, which consist of a total of 8 hours of narrated slides. The first video has more than 6000 views on YouTube, which is three orders-of-magnitude more than the number of students that I had in the course. I received many requests for the slides, so I uploaded them to GitHub.

Here is the video series in its entirety:

I will keep these resources available. If you are a teacher, please feel free to reuse the videos or slides in your teaching! I hope that the efforts that I and other teachers put into producing online content during the pandemic can be utilized to aid the learning of students also in the years to come.

Cell-free massive MIMO might be one of the core 6G physical layer technologies. One of my students, Giovanni Interdonato, defended his Ph.D. thesis on this topic earlier this week. In this video, he speaks with me about his thesis work and his time as a doctoral student.

I just finished giving an IEEE Future Networks Webinar on the topic of Cell-free Massive MIMO and radio stripes. The webinar is more technical than my previous popular-science video on the topic, but it can anyway be considered an overview on the basics and the implementation of the technology using radio stripes.

If you missed the chance to view the webinar live, you can access the recording and slides afterwards by following this link. The recording contains 42 minutes of presentation and 18 minutes of Q/A session. If your question was not answered during the session, please feel to ask it here on the blog instead.

Update: The recording from the webinar has been delayed (due to the virus crisis), so I have recorded an alternative video:

Emerging intelligent reflecting surface (IRS) technology, also known under the names “reconfigurable intelligent surface” and “software-controlled metasurface”, is sometimes marketed as an enabling technology for 6G. How do they work, what are their use cases and how much will they improve wireless access performance at large?

atoms, each of which acts as an “intelligent” scatterer: a small antenna that receives and re-radiates without amplification, but with a controllable phase-shift. Typically, an atom is implemented as a small patch antenna terminated with an adjustable impedance. Assuming the phase shifts are properly adjusted, the

scattered wavefronts can be made to add up constructively at the receiver. If coupling between the atoms is neglected, the analysis of an IRS essentially entails (i) finding the Green’s function of the source (a sum of spherical waves if close, or a plane wave if far away), (ii) computing the impinging field at each atom, (iii) integrating this field over the surface of each atom to find a current density, (iv) computing the radiated field from each atom using physical-optics approximation, and (v) applying the superposition principle to find the field at the receiver. If the atoms are electrically small, one can approximate the re-radiated field by pretending the atoms are point sources and then the received “signal” is basically a superposition of phase-shifted (as

A point worth re-iterating is that an atom is a scatterer, not a “mirror”. A more subtle point is that the entire IRS as such, consisting of a collection of scatterers, is itself also a scatterer, not a mirror. “Mirrors” exist only in textbooks, when a plane wave is impinging onto an infinitely large conducting plate (none of which exist in practice). Irrespective of how the IRS is constructed, if it is viewed from far enough away, its radiated field will have a beamwidth that is inversely proportional to its size measured in wavelengths.

Two different operating regimes of IRSs can be distinguished:

1. Both transmitter and receiver are in the far-field of the surface. Then the waves seen at the surface can be approximated as planar; the phase differential from the surface center to its edge is less than a few degrees, say. In this case the phase shifts applied to each atom should be linear in the surface coordinate. The foreseen use case would be to improve coverage, or provide an extra path to improve the rank of a point-to-point MIMO channel. Unfortunately in this case the transmitter-IRS-path loss scales very unfavorably, as

is the number of meta-atoms in the surface, and the reason is that again, the IRS itself acts as a (large) scatterer, not a “mirror”. Therefore the IRS has to be quite large before it becomes competitive with a standard single-antenna decode-and-forward relay, a simple, well understood technology that can be implemented using already widely available components, at small power consumption and with a small form factor. (In addition, full-duplex technology is emerging and may eventually be combined with relaying, or even massive MIMO relaying.)

2. At least one of the transmitter and the receiver is in the surface near-field. Here the plane-wave approximation is no longer valid. The IRS can then either be sub-optimally configured to act as a “mirror”, in which case the phase shifts vary linearly as function of the surface coordinate. Alternatively, it can be configured to act as a “lens”, with optimized phase-shifts, which is typically better. As shown for example in this paper, in the near-field case the path loss scales more favorably than in the far-field case. The use cases for the near-field case are less obvious, but one can think of perhaps indoor environments with users close to the walls and every wall covered by an IRS. Another potential use case that I learned about recently is to use the IRS as a MIMO transmitter: a single-antenna transmitter near an IRS can be jointly configured to act as a MIMO beamforming array.

So how useful will IRS technology be in 6G? The question seems open. Indoor coverage in niche scenarios, but isn’t this an already solved problem? Outdoor coverage improvement, but then (cell-free) massive MIMO seems to be a much better option? Building MIMO transmitters from a single-antenna seems exciting, but is it better than using conventional RF? Perhaps it is for the Terahertz bands, where implementation of coherent MIMO may prove truly challenging, that IRS technology will be most beneficial.

A final point is that nothing requires the atoms in an IRS to be located adjacently to one another, or even to form a surface! But they are probably easier to coordinate if they are in more or less the same place.

I have recorded a popular science video that explains how a cell-free network architecture can provide major performance improvements over 5G cellular networks, and why radio stripes is a promising way to implement it:

If you want more technical details, I recommend our recent survey paper “Ubiquitous Cell-Free Massive MIMO Communications“. One of the authors, Dr. Hien Quoc Ngo at Queen’s University Belfast, has created a blog about Cell-free Massive MIMO. In particular, it contains a list of papers on the topic and links to the programming code of some of them.