Pilots are predefined reference signals that are transmitted to let the receiver estimate the channel. While many communication systems have pilot transmissions in both uplink and downlink, the canonical communication protocol in Massive MIMO only contains uplink pilots. In this blog post, I will explain when downlink pilots are needed and why we can omit them in Massive MIMO.

Consider the communication link between a single-antenna user and an

varies over time and frequency in a way that is often modeled as random fading. In each channel coherence blocks, the BS selects a precoding vector

and uses it for downlink transmission. The precoding reduces the multiantenna vector channel to an effective single-antenna scalar channel

The receiving user does not need to know the full

. However, to decode the downlink data in a successful way, it needs to learn the complex scalar channel

. The difficulty in learning

depends strongly on the mechanism of precoding selection. Two examples are considered below. 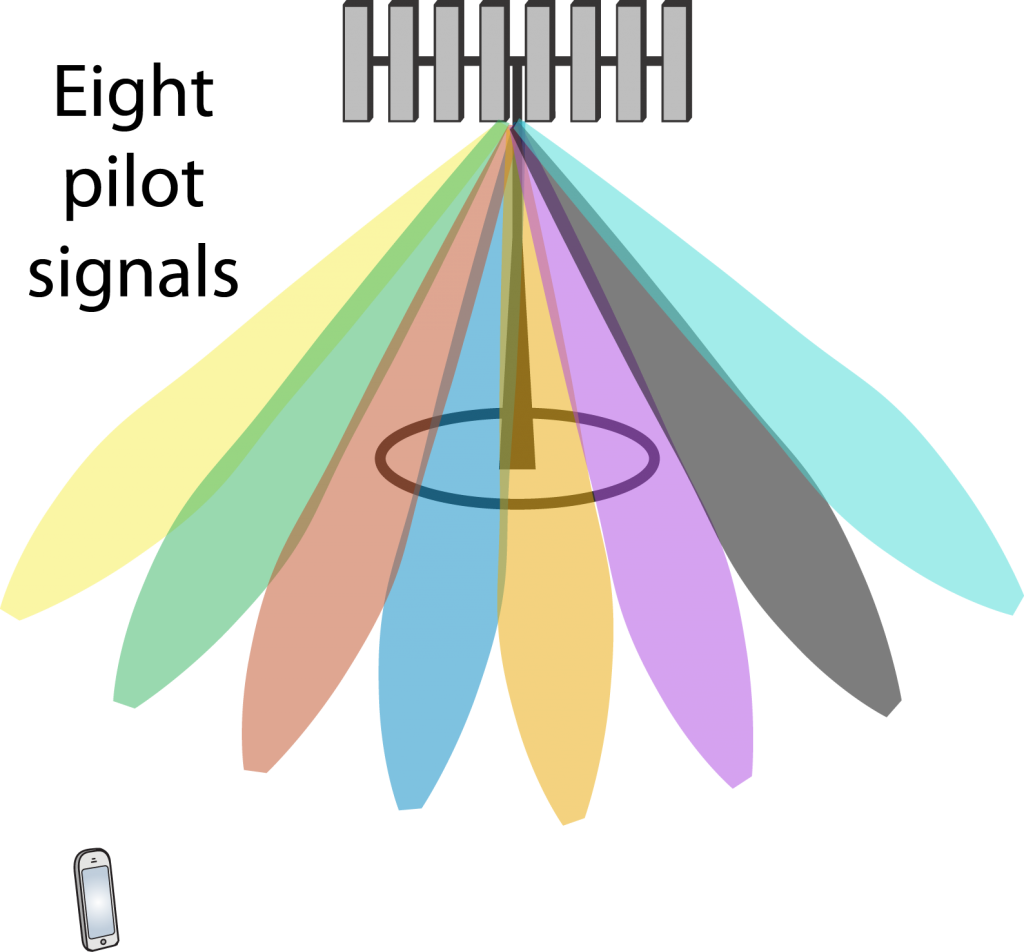 In this case, the BS tries out a set of different precoding vectors from a codebook (e.g., a grid of beams, as shown to the right) by sending one downlink pilot signal through each one of them. The user measures

. The BS will then transmit data using that precoding vector. During the data transmission,

can have any phase, but the user already knows the phase and can compensate for it in the decoding algorithm.

If multiple users are spatially multiplexed in the downlink, the BS might use another precoding vector than the one selected by the user. For example, regularized zero-forcing might be used to suppress interference. In that case, the magnitude

of the channel changes, but the phase remains the same. If phase-shift keying (PSK) is used for communication, such that no information is encoded in the signal amplitude, no estimation of

is needed for decoding (but it can help to reduce the error probability). If quadrature amplitude modulation (QAM) is used instead, the user needs to learn also

to decode the data. The unknown magnitude can be estimated blindly based on the received signals. Hence, no further pilot transmission is needed. 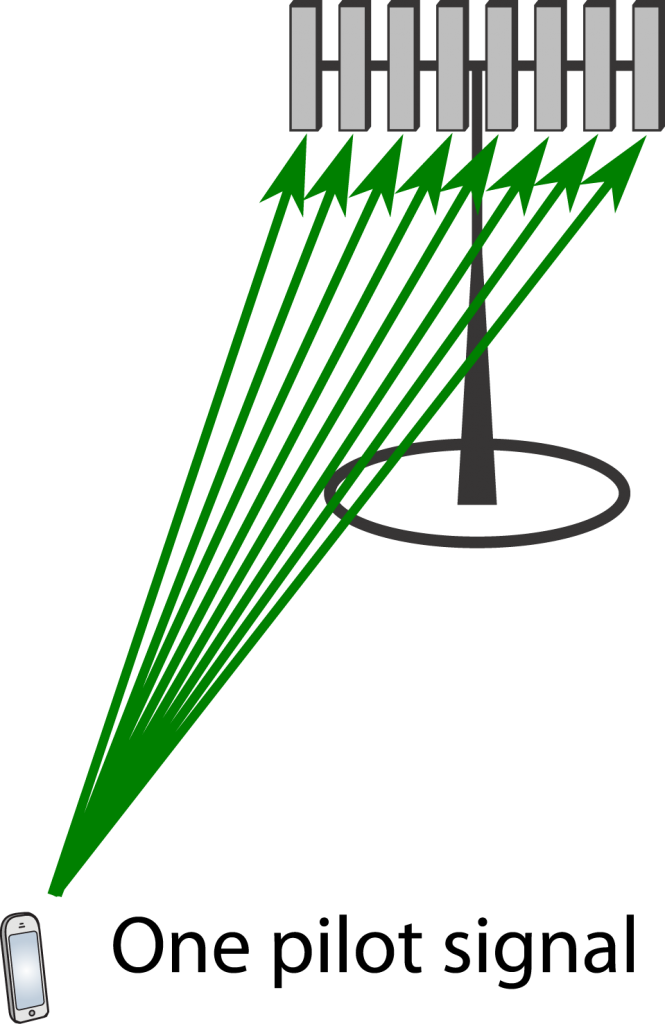 In this case, the user transmits a pilot signal in the uplink, which enables the BS to directly estimate the entire channel vector

. For the sake of argument, suppose this estimation is perfect and that maximum ratio transmission with

is used for downlink data transmission. The effective channel gain will then be

which is a positive scalar. Hence, the user only needs to learn the magnitude of

because the phase is always zero. Estimation of

can be implemented without downlink pilots, either by relying on channel hardening or by blind estimation based on the received signals. The former only works well in Massive MIMO with very many antennas, while the latter can be done in any system (including codebook-based precoding).

We generally need to compensate for the channel’s phase-shift at some place in a wireless system. In codebook-based precoding, the compensation is done at the user-side, based on the received signals from the downlink pilots. This is the main approach in 4G systems, which is why downlink pilots are so commonly used. In contrast, when using reciprocity-based precoding, the phase-shifts are compensated for at the BS-side using the uplink pilots. In either case, explicit pilot signals are only needed in one direction: uplink or downlink. If the estimation is imperfect, there will be some remaining phase ambiguity, which can be estimated blindly since we know that it is small (i.e., of all possible phase-rotations that could have resulted in the received signal, the smallest one is most likely).

When we have access to TDD spectrum, we can choose between the two precoding methods mentioned above. The reciprocity-based approach is preferable in terms of less overhead signaling; one pilot per user instead of one per index in the codebook (the codebook size needs to grow with the number of antennas), and no feedback is needed. That is why this approach is taken in the canonical form of Massive MIMO.

23 thoughts on “When Are Downlink Pilots Needed?”