After some successful trials, the first deployments of TDD-LTE with Massive MIMO functionality were unveiled earlier this year. For example, the telecom operator Sprint turned on Massive MIMO base stations in Chicago, Dallas, and Los Angeles last April.

If you read the press release from Sprint, it is easy to get confused regarding the number of antennas being used:

From reading this quote, I get the impression that the Massive MIMO arrays contain 128 antennas, whereof 64 are used for the transmission and another 64 for the reception. That would be a poor system design, since channel reciprocity can only be exploited in TDD if the same antennas are used for both transmission and reception!

Fortunately, this is not what Sprint and other operators have actually deployed. According to my sources, the arrays contain 64 dual-polarized elements, so there are indeed 128 radiating elements. However, as I explained in a previous blog post, an antenna consists of a collection of radiating elements that are connected to the same RF chain. The number of antennas is equal to the number of RF chains, which is 64 in this case. The reason that Sprint points out that there are 64 transmit antennas and 64 receive antennas is because different RF chains are used for transmission and reception. The system switches between them according to the TDD protocol. In principle, one could design an array that has a different number of RF chains in the uplink than in the downlink, but that is not the case here. 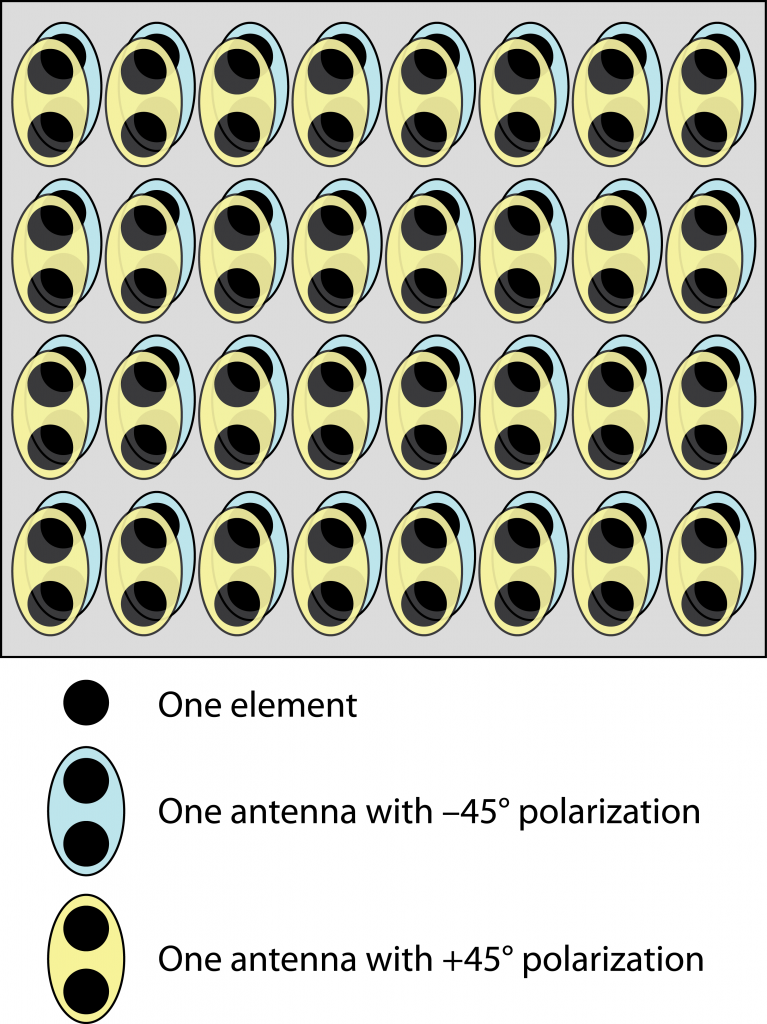 So how are the 128 elements mapped to 64 antennas (RF chains)? This is done by taking pairs of vertically adjacent elements, which have the same polarization, and connecting them to the same RF chain.  This is illustrated in the figure to the right (see this blog post for pictures of how the actual arrays look like). As compared to having 128 RF chains (and antennas), this design choice results in lower flexibility in elevation beamforming, but the losses in data rates and multiplexing capability are supposed to be small since there are much larger variations in azimuth angles between the users in a cellular network than in the elevation angles. (This is explained in detail in Section 7.3-7.4 of my book). The advantage is that the implementation is more compact and less expensive when having 64 instead of 128 antennas.