Suppose extra antennas and RF chains came at no material cost. How large an array could eventually be useful, and would power consumption eventually render “extreme Massive MIMO” infeasible?

I have argued before that in a mobile access environment, no more than a few hundred of antennas per base station will be useful. In an environment without significant mobility, however, the answer is different. In [1, Sec. 6.1], one case study establishes the feasibility of providing (fixed) wireless broadband service to 3000 homes, using a single isolated base station with 3200 antennas (zero-forcing processing and max-min power control). The power consumption of the associated digital signal processing is estimated in [1, homework #6.6] to less than 500 Watt. The service of this many terminals is enabled by the long channel coherence (50 ms in the example).

Is this as massive as MIMO could ever get? Perhaps not. Conceivably, there will be environments with even larger channel coherence. Consider, for example, an outdoor city square with no cars or other traffic – hence no significant mobility. Eventually only measurements can determine the channel coherence, but assuming for the sake of argument 200 ms by 400 kHz, gives room for training of 40,000 terminals (assuming no more than 50% of resources are spent on training). Multiplexing these terminals would require at least 40,000 antennas, which would, at 3 GHz and half wavelength-spacing, occupy an area of 10 x 10 meters (say with a rectangular array for the sake of argument) – easily integrated onto the face of a skyscraper.

Is this science fiction or will we be seeing this application in the future? The application is fully feasible, with today’s circuit technology, and does not violate known physical or information theoretic constraints. Machine-to-machine, IoT, or perhaps virtual-reality-type applications may eventually create the desirability, or need, to build extreme Massive MIMO. 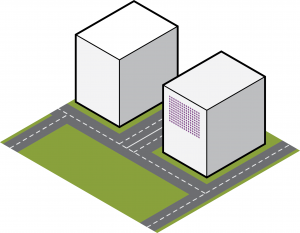